After a year’s hiatus due to COVID-19, UNO Press was eager and grateful to refill our psychic coffers at the sacred font of Mardi Gras. Check out our staff’s impressions and reflections below.

Throughout the pandemic, I found solace along Bayou St. John. For all those months when gathering felt unsafe, I walked outside alone. Sometimes for hours. Maybe I couldn’t visit a restaurant or a movie theater, but I could still stroll along the water and watch the birds: the egrets patiently stalking, the pelicans dive-bombing, the anhingas drying their feathers.

With their enormous yellow irises and the dramatic stripes of brown across their white heads, ospreys are always a joy to see. There’s a lot to admire in this cosmopolitan raptor: the precision with which they snatch fish from the water, the care with which they parent their young, the flexibility and resilience that allows them to thrive on all but one of the planet’s continents.

So this year, to honor my favorite fish-hawk, I costumed as an osprey sea captain and handed out packets of Swedish Fish. It was my first attempt at making a papier-mâché mask, but it won’t be the last. After all the incredible costumes I witnessed on Tuesday, I’m already debating what I’ll wear next Mardi Gras—there are so many fascinating bayou creatures to choose from.

Masking osprey on the Mississippi on Mardi Gras Day.

To write about the parades is like dancing about architecture, but I am going to try anyway.

I went directly from the hardest moment, checking an old friend into the hospital, out into Eris. The band claimed that it wasn’t their finest night, but I felt and needed every note.

Simone made a costume for herself and headpieces for Daniel and me for Loup Garou, and we paddled up to meet them. Slow Danger gave us music to paddle by, and I had that feeling that parents get often as they glimpse the fully separate human their child is becoming. 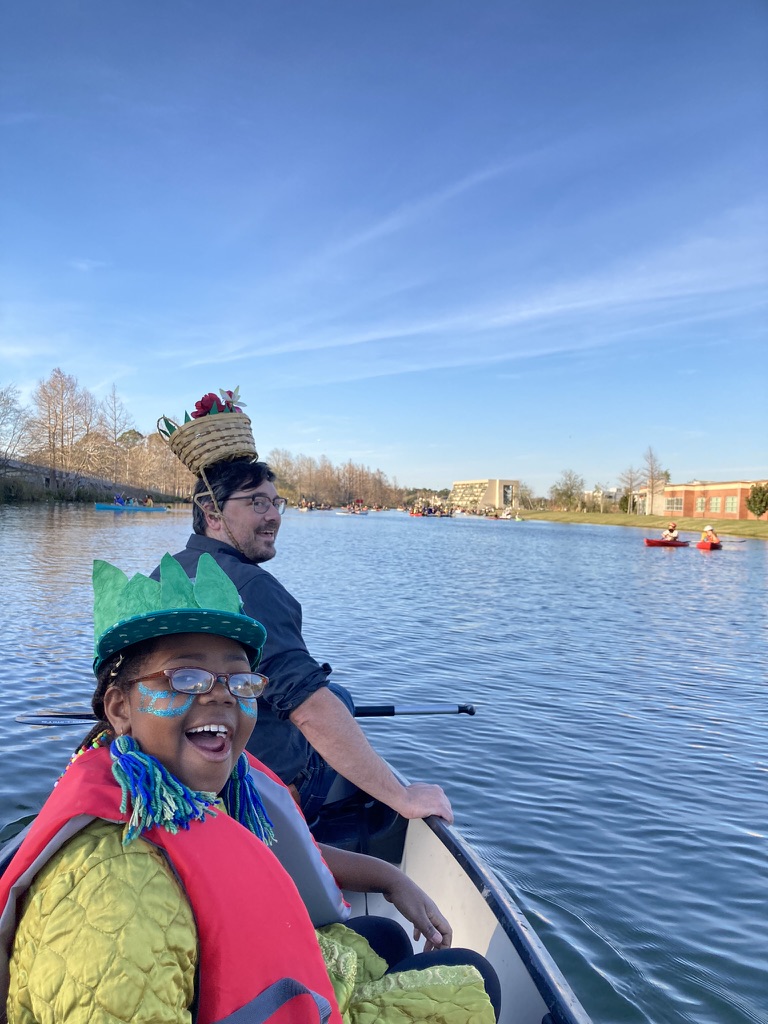 Every year by the time Mardi Gras has crescendoed, I am reminded of one of RuPaul’s great refrains: “We are born naked and the rest is drag.” And I feel lucky (again) to live in a city that teaches me again and again.

And that’s why we can’t get rid of throws: beads are plentiful, cheap, and democratic, which makes them the perfect souvenir.

UNO graduate Lissa Capo wrote a wonderful thesis about this in 2011 (“Throw Me Something, Mister”: The History of Carnival Throws in New Orleans). “Plastic beads revolutionized Mardi Gras,” they write, “giving Mardi Gras a mass market….Traditionalists feel that the capitalistic market damaged Mardi Gras.” According to Capo, before the very untraditional super krewes and the plastic that sustains them, paraders tossed European glass beads. The glass trinkets were relatively more expensive and rare. Before the glass beads, there were even rarer gifts (bonbons, flowers, almonds) tossed to the hoi polloi by elites as they paraded between ballrooms. So, as Capo observes, the adoption of mass trinkets—besides leaving parade route soil contaminated with lead—created the mass party we know today, pushing Mardi Gras out of the ballrooms and into the street.

For more about contaminated parade routes, check out “The Toxic Truth Behind Mardi Gras Beads.”

My partner and I Mardi Gras as two celestial bodies: she, a cloud, me, a star.

Meeting with Abram and Shana by the river, we speak of the paradoxical power of masking: we don the guise of something we’re not, yet, in doing so, we (temporarily) become that very thing.

My choice of star was reflexive, not intentional—though, sure, as a younger person, I wanted to be famous someday. Stars are also magic-seeming coordinates for journeys larger and more perilous than life, like the Drinking Gourd constellation pointing to Polaris, prayed-on beacon for the northerly self-emancipated.

But I’m not a star. My body’s main building blocks aren’t helium and hydrogen; I don’t blaze, but breathe and feel. And while my consciousness at times might tread through velvety space, I am grounded nevertheless: The meat of my face gets sore from smiling at (with) the people we pass. In my wonder, my wandering gaze, I trip over live oak roots with my aching feet.

In tarot, the Star represents healing, hope, and serenity, the promise of inspiration—though, when invited to pluck a be-glittered card from the emerald green cape of a fellow reveler, it’s the Hermit that I draw.

I’m not a star, just as August isn’t a cloud, but people smile when they see us, sometimes seemingly in spite of themselves. Their faces light up and they call to us: “Very cute, girls! [sic]” “I like that!” “Adorable!” Against the boom and blare of Carnival, there is still the space of my mind, space for grief and joy, gratitude and bewilderment—and, on this glorious Mardi Gras Day, there’s the hope smiling back at me.

At some point in our hours of costume construction, I haphazardly hot glued a few quarter-sized mirrors to one tip of my Super Mario-style star. Hopefully in them, people see their own spark mirroring back. I hope New Orleans sees herself in all her renewing splendor, sees a shiver of herself in me.

It takes a village to pull a float.

Most apparent is the effort that goes into the amazing floats, either built by the krewes themselves or created by New Orleans’ unique float-building industry. But there is also the more individual effort and creativity on display in the imaginative costumes you often only catch glimpses of because there are too many overwhelming your senses simultaneously. And then there are the signature throws (Zulu Coconuts, Muses Shoes, Cleopatra Cups, King Arthur Grails…) that krewes work on throughout the year, only to hand them out to the crowd over a few short, exuberant hours.

But in addition to all that glitter and gold, there are the other important parts of the Mardi Gras machine that we sometimes overlook: The police officers keeping the crowds, overeager for throws, from interrupting the marching bands. The fantastic young musicians and dancers from high schools throughout the area marching before or after the floats. The float drivers on their tractors, seemingly detached and grounded in contrast to the otherworldly creations they are pulling behind them. And once the magic is over, and the beads and throws that were fought over earlier are forgotten and discarded, there’s the clean-up crews (or Krewes of Cleanup?) that whisk away the aftermath.

But all these parts come together to make Mardi Gras the magical experience that it is, and I’m very grateful that I got to experience the show!